The loss by the Russians of the large landing ship Saratov cost the invaders very dearly. Why was supplying by amphibious assault ships important for them, and will blowing up a ship change the operational situation?

Mines and Molotov cocktails instead of flowers

After the Russian army occupied Melitopol and Berdiansk, fought a fierce encounter battle with the Armed Forces of Ukraine in Tokmak and stretched the gut to Zaporizhzhia, Moscow again faced the question of the cursed supply in the northeast of Chonhar.

The roads worn-down by the army and that were not in the best condition even in peacetime frankly could not cope. The arm even from the camps at the isthmus to the conditional Manhush or the contact line along the Kamenske-Huliaipole line took 12-13 hours there with loading and 12-13 hours from there with unloading.

This is all on the territory where the Russian army was greeted not with flowers and sweets, but with mines and Molotov cocktails. Great risk, heavy strain on drivers, and rapidly ending resources of vehicles.

Those who want to soak up the atmosphere that prevails in the second army of the world can enjoy the interrogation of a war prisoner — without any military operations, eight vehicles were broken down in a tank company.

The bridge near Henichesk was blown up and all the supplies were relying on the isthmus, making the situation even more difficult. Escort convoys to the group advancing to the west (49th Army and 22nd Corps in the direction of the Pivdennyi Buh crossings) and to the east (Enerhodar with Mariupol) were frankly not enough.

From there — armored trains, which played a role not only for the propaganda evacuation to the Crimea, but also repaired and maintained the branch line to Berdшansk — in such conditions, railway has a strategic role.

A little later, when the Russians took possession of the Vostok Naval Forces base, they began to use large landing ships to deliver fuel and ammunition. Supplying the advancing group from the coast is not a new word in military affairs. The Germans in World War Two actively used self-propelled armed barges in Pryazovia.

In such a war a la 1918, when quite tiny companies and battalions are fighting for junctions, stations, and ports on 2,000 km of the theater of military operations, the main strain is placed on the rear.

What weapons Ukraine will get from the West. Plan for the nearest future and how it will shore up our defenses

Which, in the case with the Russians, has to operate in an extremely hostile territory, where the locals at least actively aim the army and territorial defense units at the columns, and usually they themselves can take part in raids on poorly armed convoys. A series of small battles and skirmishes not only inflicts losses on the "tails of the columns", but also weakens them.

The large landing ship Orsk arrived at the port of Berdiansk with fanfare and headlines in the Russian media that "the neo-Nazis left the base Vostok without a fight." On March 21, the ship brought armored personnel carriers, ammunition, food, and accoutrements for the advancing group. A couple of days later, a full-fledged "express" was launched, as in Syria: the entire group of Russian large landing ships began to work on supply tasks — both the 775 Ropuha project and the 1171 Tapir project. Vehicles, tanks, wagons with ammunition, fuel and lubricants — all this was unloaded every day in the amount of 4,000-5,000 tons. 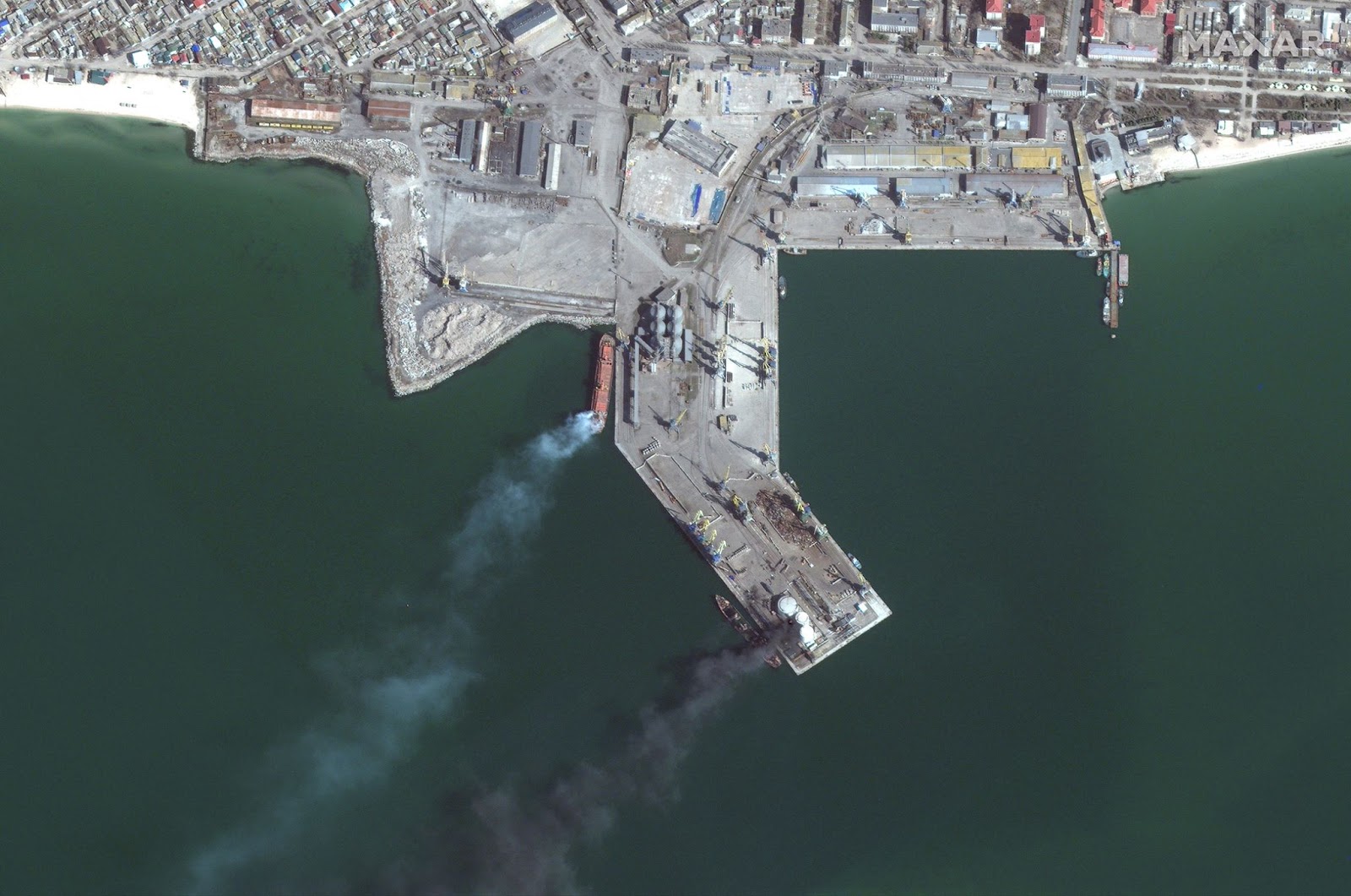 On the morning of March 24 at 7:00 a.m., the Armed Forces of Ukraine put an end to this case with the Tochka missile. The video from the port camera shows a small air blast and a single explosion — thoughts have already been expressed about sabotage or a strike from Bayraktar. But the fire at the bulk carrier stern from the satellite image is embarrassing — too far for the scattered ammunition accumulated on the pier.

In a matter of minutes, the Saratov large landing ship (at first the media reported about the destruction of the Orsk, but then the General Staff clarified the information — Ed. note) anchored at the southern part of the pier, was engulfed in flames, ten minutes later the gun ammunition on the prow detonated — the prow landing ramp was ripped and torn open from a powerful explosion.

The ship lay on the seabed at a depth of 5 meters and sank — the fire was so strong that there was no fight for survivability. The fate of 55 crew members is unknown — a dozen multipurpose helicopters arrived in Berdiansk to conduct a medical evacuation. We hope that the burn wards in the Crimea are overburdened by their work to the max. 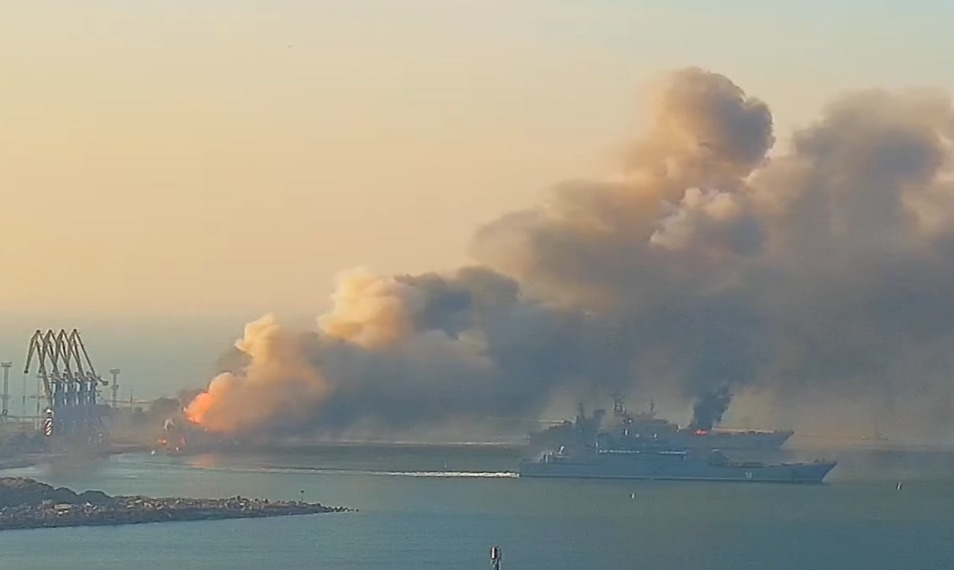 The other two Tapirs left blackened with smoke — one of them, prow gun mount was flaring quite strongly. Another proof that there was a penetration below the deck with a fire, and not random scattering of shells.

But, judging by the fact that the ships immediately went straight to Sevastopol, and not to Kerch, there were no serious damages, only a few crew members killed, damaged cockpits and ship skin. I do not think that a long and difficult repair will be required — I need to be not only a patriot of my country, but also a realist.

What Ukraine gains from sinking Saratov

What did Ukraine gain from this strike, besides moral satisfaction and revenge for the Slaviansk that died in the radar patrol on March 3? It was hit by an X-31 missile.

A break in the supply of the group west of Mariupol is unlikely, despite the connection of the DPR and Crimea: in the foreseeable future, it will be supplied through minefields, fortifications, and shell-damaged positions south of Volnovakha.

But this will slow down the assault on the most blockaded agglomeration and the attack on Vuhledar with Mariinka. The operation clearly had an impact on the operational level.

Odesa can now take a breath in the context of anti-landing activities. The probability of landing in Lyman or near the city was already low, but now (when Moscow declares that it will focus on the JFO zone) it has completely disappeared. Because there are few of those in the Black Sea Fleet of the Russian Federation who want to to get under the combined blow of Hurricanes and the Tochka battery, and there are not enough forces to hold positions near Mykolaiv. 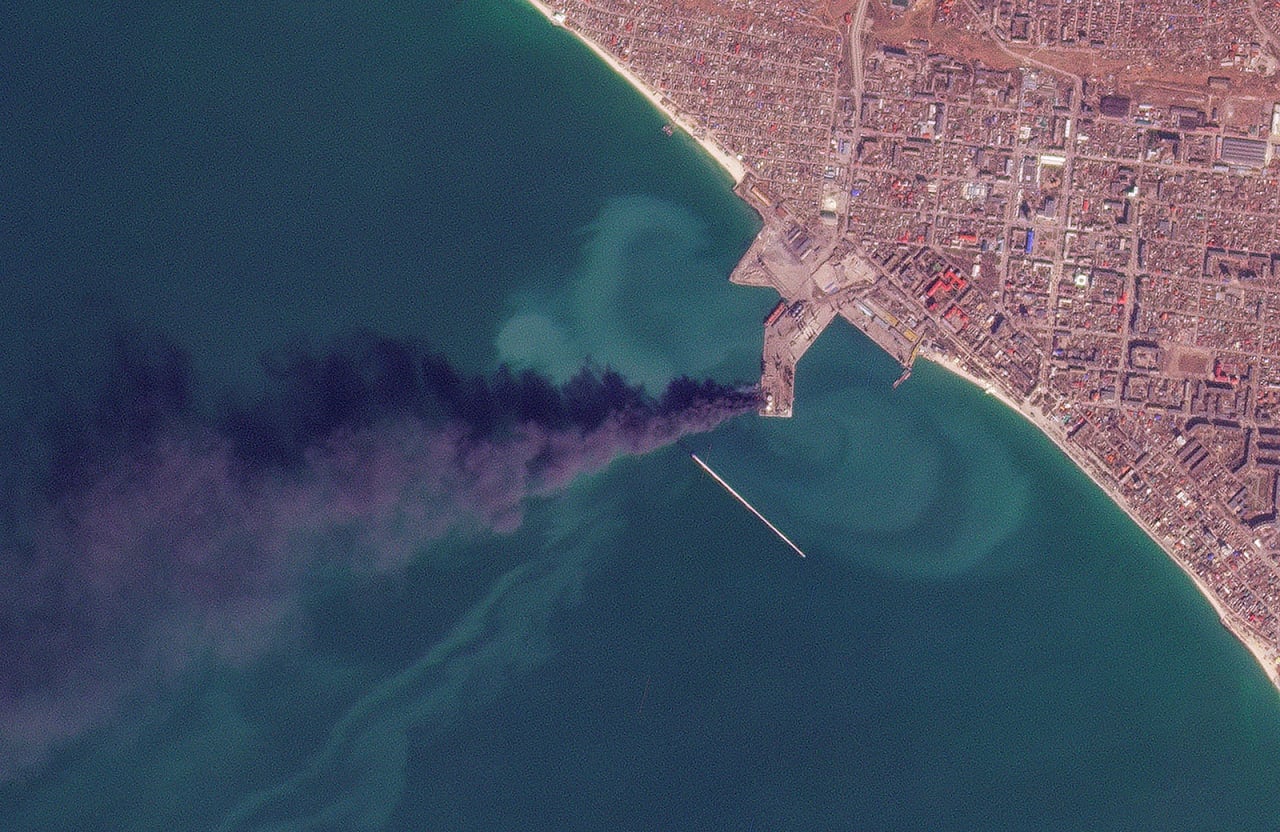 Supply reserves under unloading, fuel reserves, unloading teams, the pier security teams, and, with a high degree of probability, armored vehicles were struck. It is a great success that, almost at the limit of the weapon possibilities, the Russians were hit so well.

After damaging the Raptor boat from the anti-tank systems in Mariupol, the command of the Russian Federation must decrease the fleet activity in the "brown waters". Because the loss of a 113-meter ship with hundreds of tons of supplies, 3,000 tons of fuel on the pier, and the boat disabling in a matter of days is extremely expensive.

And, of course, the invaders got notably slapped in terms of propaganda. They came to pick up trophies from the Vostok base, but went to feed the mussels. They came to liberate Ukrainians from nationalists, but the majority there are nationalists. They wanted to move the borders of NATO to 1997 in 48 hours, and now they are dragging diving boats to see how the Saratov engine is doing: burned out or not.

Where does Russia get missiles, why does Macron praise China, and how does Orbán blackmail the EU? A digest of Western media

Will Ukraine be able to receive Patriot systems, and why does Kyiv threaten to impose sanctions on a French satellite company?

Russia declared a terrorist country. What does the European Parliament’s declaration mean, and will the U.S. be the next to adopt it?

Bargaining to buy some face: how Putin used Musk in the information war

Chronicle of world's economic war against Russia: New as of March 26

Battle casualties of Russian invaders as of March 26, 2022—General Staff of the AFU

Medvedev comments on Russia's readiness to use nuclear weapons

New sanctions and financial support for farmers: Highlights on war in Ukraine as of March 25

How and where refugees can exchange cash hryvnias for currency

Chronicle of world’s economic war against Russia: New as of March 25