Elephant has not yet been trampled. How Russia is turning into Iran while the TV beats the fridge

During almost two months of a large-scale invasion of Ukraine, Russia has lost part of its gold and foreign exchange reserves and jewelry export and is selling oil and shares for next to nothing.

has compiled the main theses of the discussion "Russian economy, go f*** yourself", during which Ukrainian economic experts Serhiy Budkin, Ivan Uhlianytsia and Yevhen Dubohryz explain why it is too early to bury the Russian economy, and what sanctions have already hit it already now and will hit it in 2023.

Over the past 5 weeks, Russia's gold and foreign exchange reserves, as estimated, dropped from $640 to 600 billion, says Serhiy Budkin, co-founder and managing partner at FinPoint Investment Advisors. A significant part (about $300 billion) has been arrested.

Associate expert at CASE Ukraine, ex-Deputy Head of the National Bank Department Yevhen Dubohryz provided an infographic with a slightly lower direct loss figure, but with the exception of seized assets: 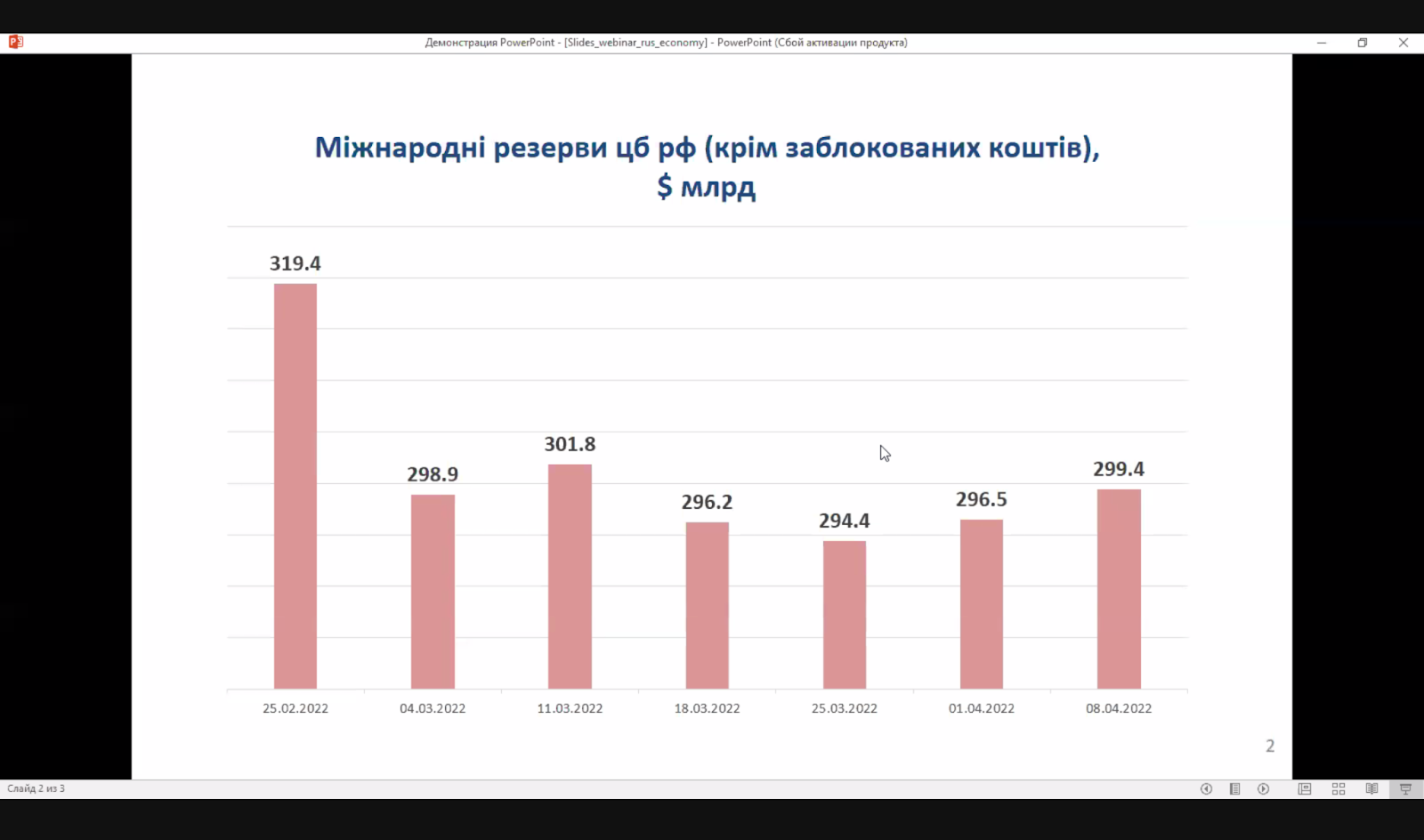 With vodka, but without sanitary towels and medications

In the coming years, Russia will definitely not run out of: 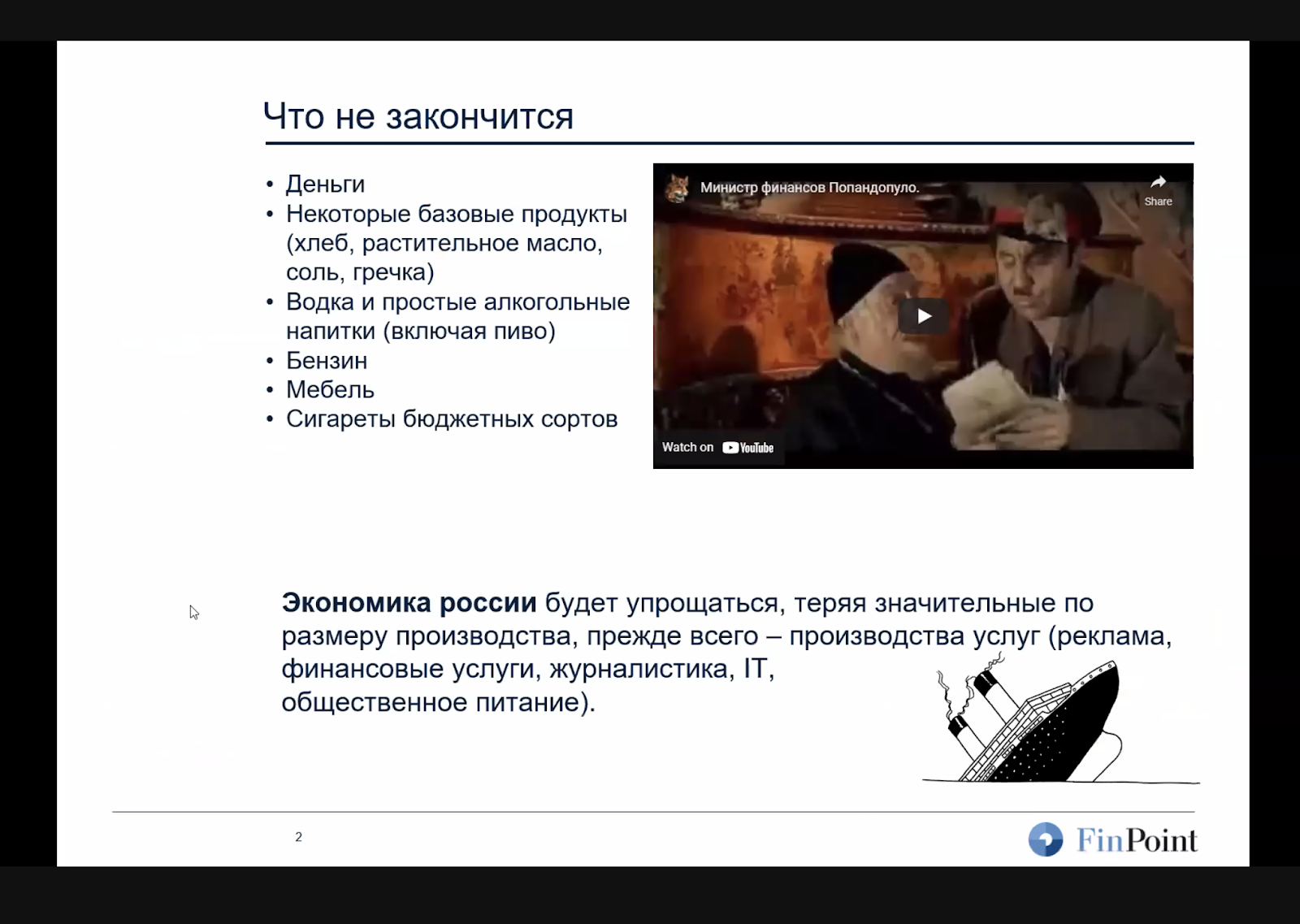 According to Serhiy Budkin, the Russian economy will be simplified, because services will no longer be needed. Advertising, financial services, journalism, IT, catering establishments — in their current form will die out as well. There will be massive layoffs and closures.

Battle casualties of Russian invaders as of April 21, 2022 — General Staff of AFU

As for what Russia has already run out or is running out, the expert gives the following list: 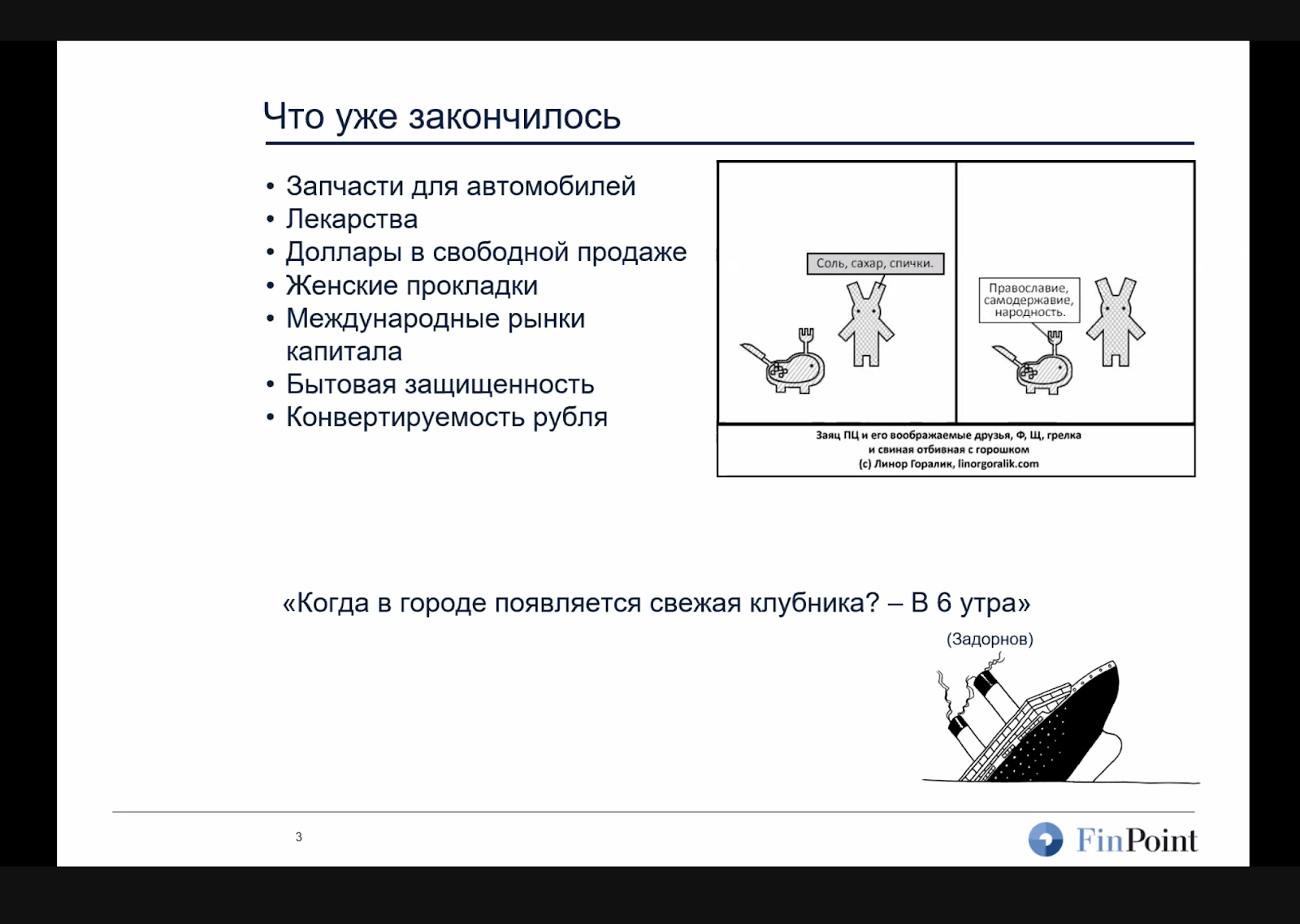 About 35% of food imports are something that will not soon be available to Russians on the territory of the Kremlin state.

Regarding how the sanctions are now affecting the Russians, Yevhen Dubohryz stresses that the oil embargo matters, but the impact on consumption is no less important. 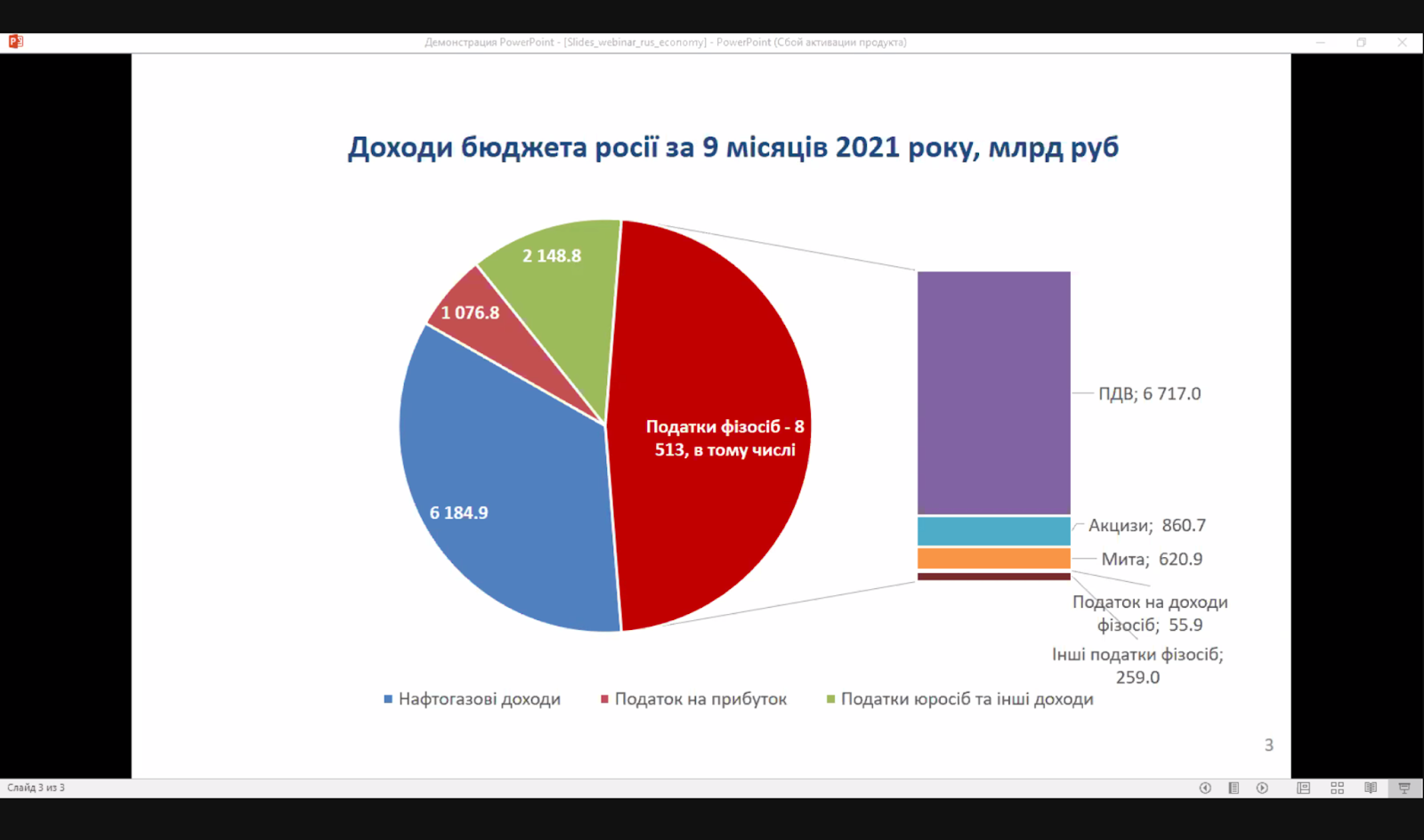 From an economic point of view, sanctions on ordinary Russians are no less effective, because this reduces the ability to fight, produce weapons, and provide logistics.

"The TV is still beating the fridge, but the fridge has begun to offer desperate resistance," Serhiy Budkin stresses.

We see an increase in the price of basic products by more than half for some items since 2020: 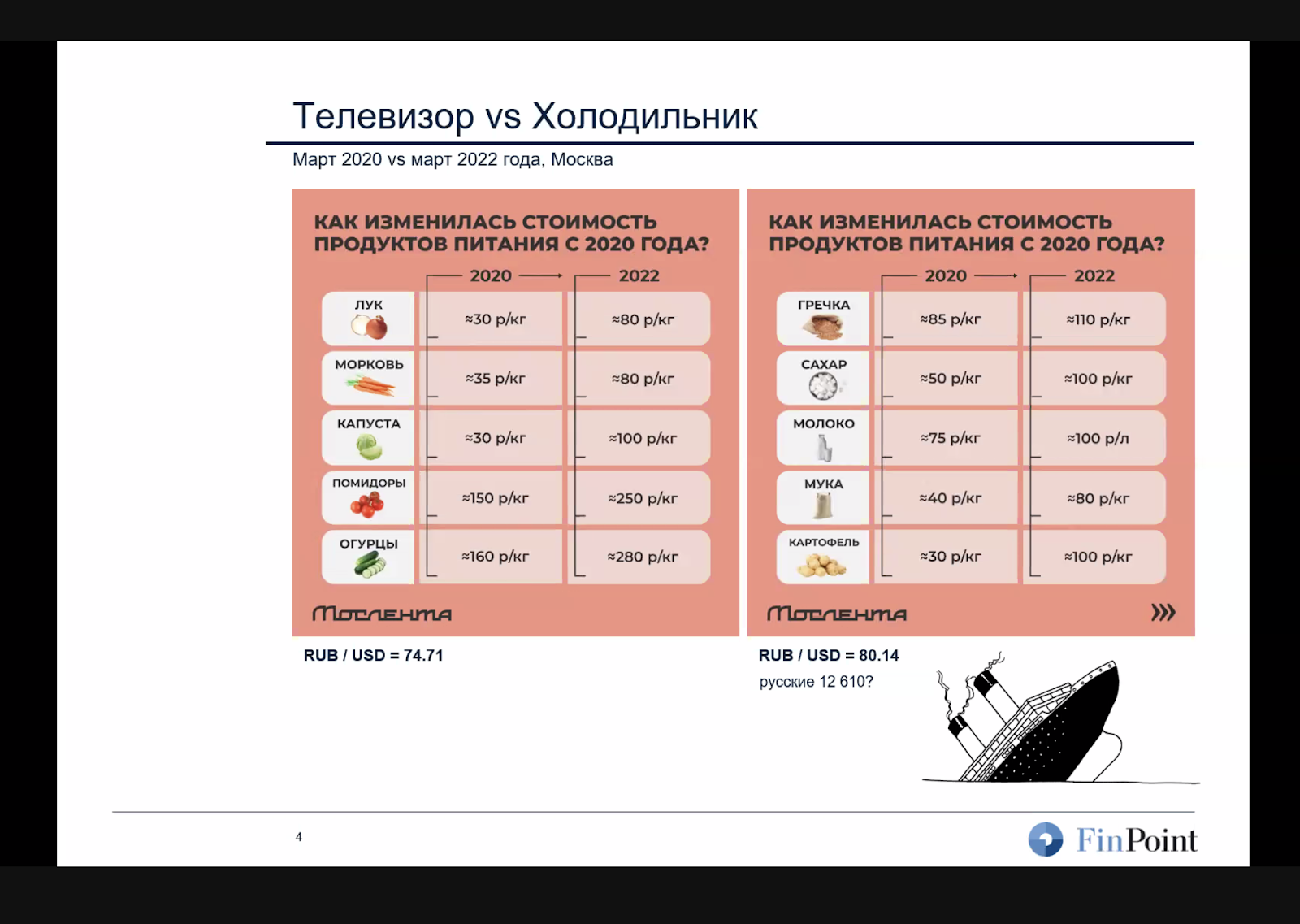 Budkin adds that consumption-related sanctions should be kept for as long as possible. According to him, this destroys the conditional social contract of the Russians with the authorities a la Singapore:

"You sacrifice freedoms, and we give you security, spiritual "bait" on TV and small but permanent economic improvement."

Investment market expert Ivan Uhlianytsia also stresses that consumption is a large base of the social contract and religious base in the Russian Federation.

"Most of the budget revenues are indirect taxes on consumption. Russia ceases to have access to quality goods and materials — it was all imports. Despite all the statements that were about all this import substitution, it was a void — nothing like this happened.

In the long term, oil, gas, metals, and weapons, as well as agricultural products will suffer in the export sector. In 2021, export shares looked like this: 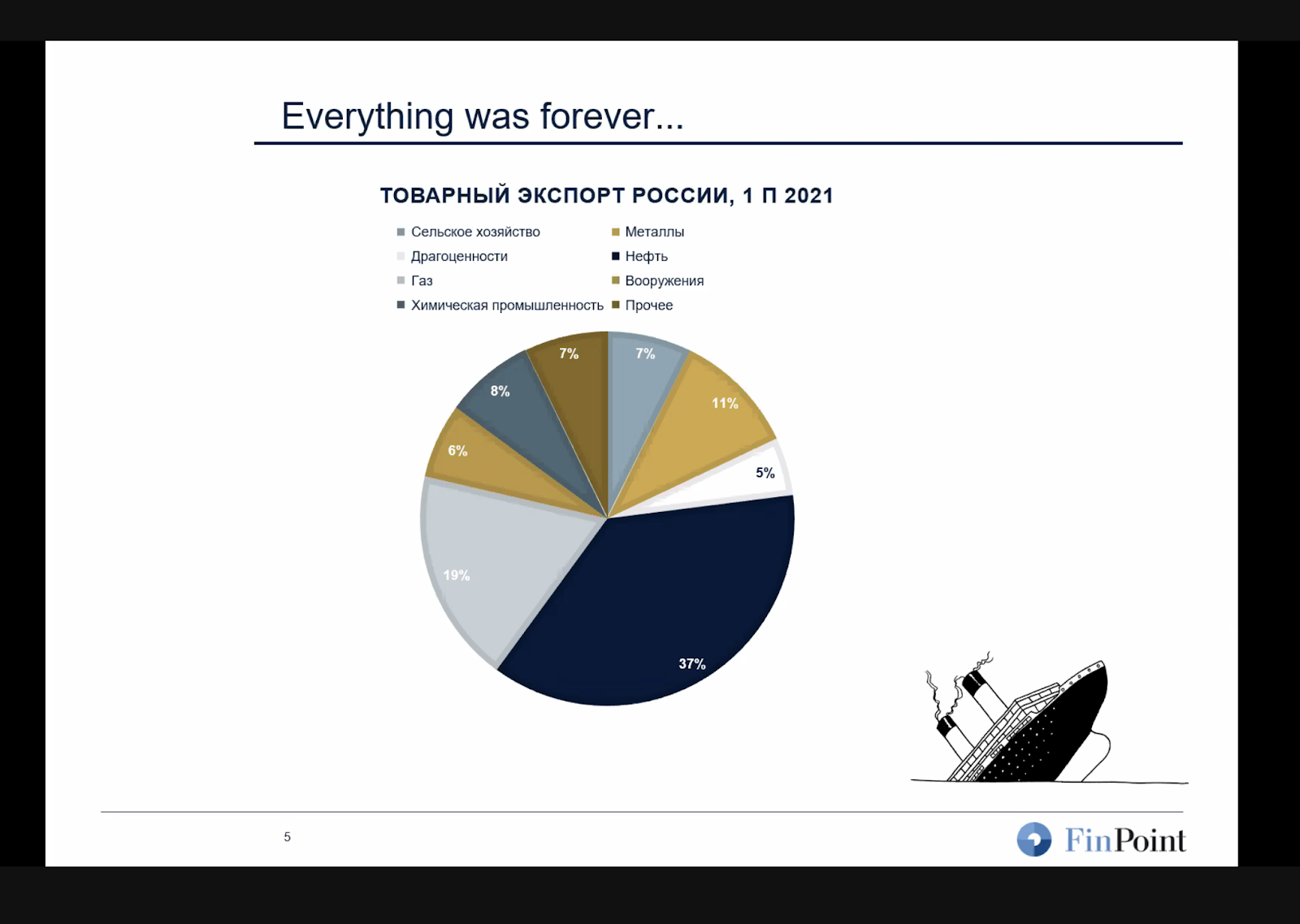 Currently and in 2023, the situation will be as follows: 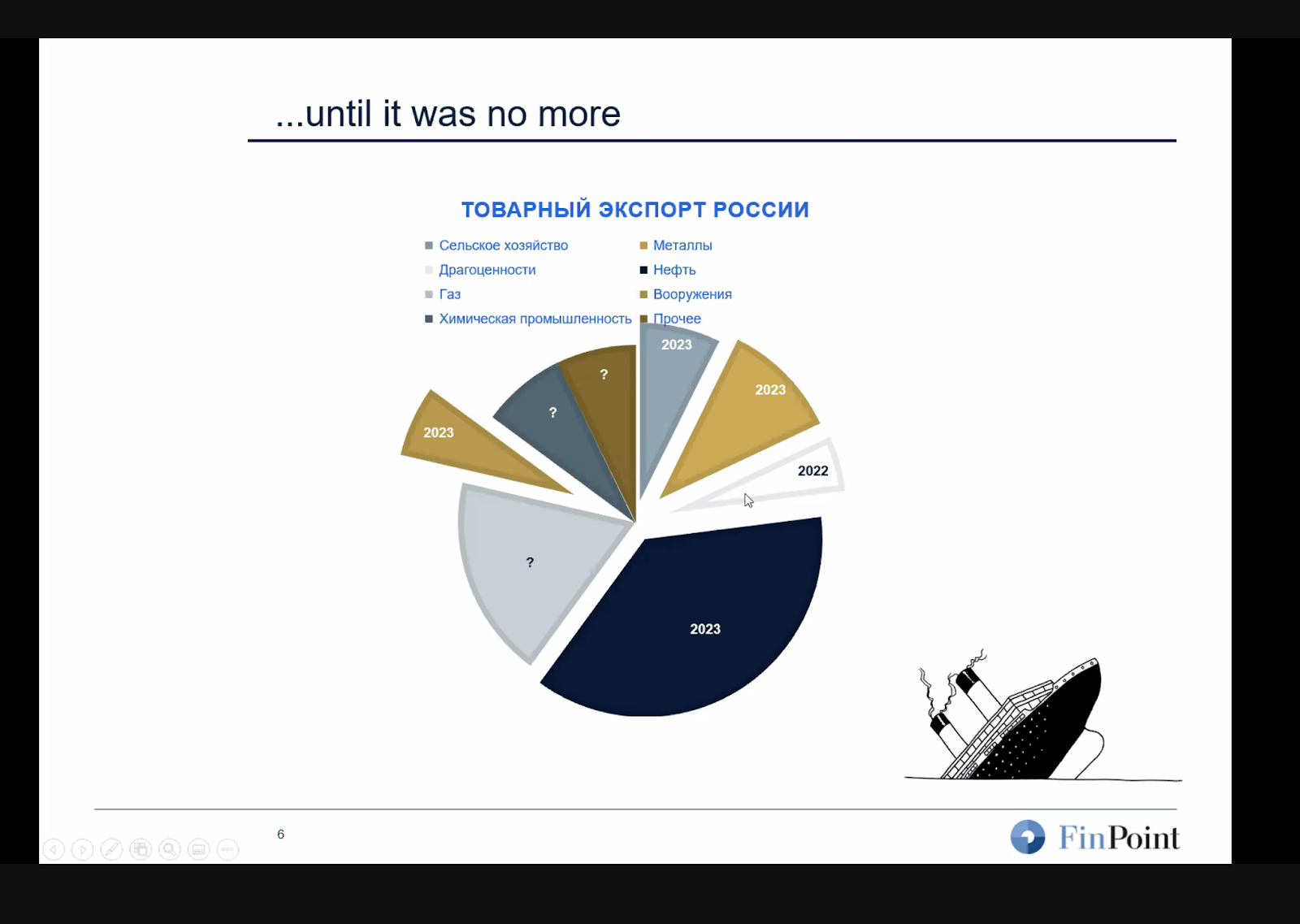 Until the end of the year, the share of agriculture will increase, but next year it will face problems, says Serhiy Budkin.

Regarding what problems have already begun in Russia and what are waiting for it in 2023, we see the following picture:

"The most important thing is that Russian weapons have shown that they do not produce the results that they advertise at exhibitions. In addition, regardless of the results of the hostilities now, Russia will need to rearm, so exports will decrease in 2023," Budkin says.

"Shale oil from the United States has played a role here, and another factor to impact this is that the US will finally persuade any of the major states to increase selling energy products so that world prices decrease a little," the expert stresses.

Ivan Uhlianytsia is also sure that the energy embargo also awaits Russia:

"This will directly hit incomes, foreign exchange earnings, and there are no more significant incomes in Russia. Some kind of ban must be implemented, a gradual flow of long-term contracts that will no longer be renewed awaits them.

He also confirmed the impossibility or significant decrease in sales — now or soon — of metal, agricultural products, precious metals, and oil products over the indirect sanctions, when large companies refuse to buy "dirty oil":

"Companies, as well as civilized countries, do not want to deal with dirty bloody oil and metals."

Russia on the way to Iran’s fate

The Russian Federation in the context of the sanctions imposed on the state and ordinary citizens will have much in common with Iran. These are the following consequences: 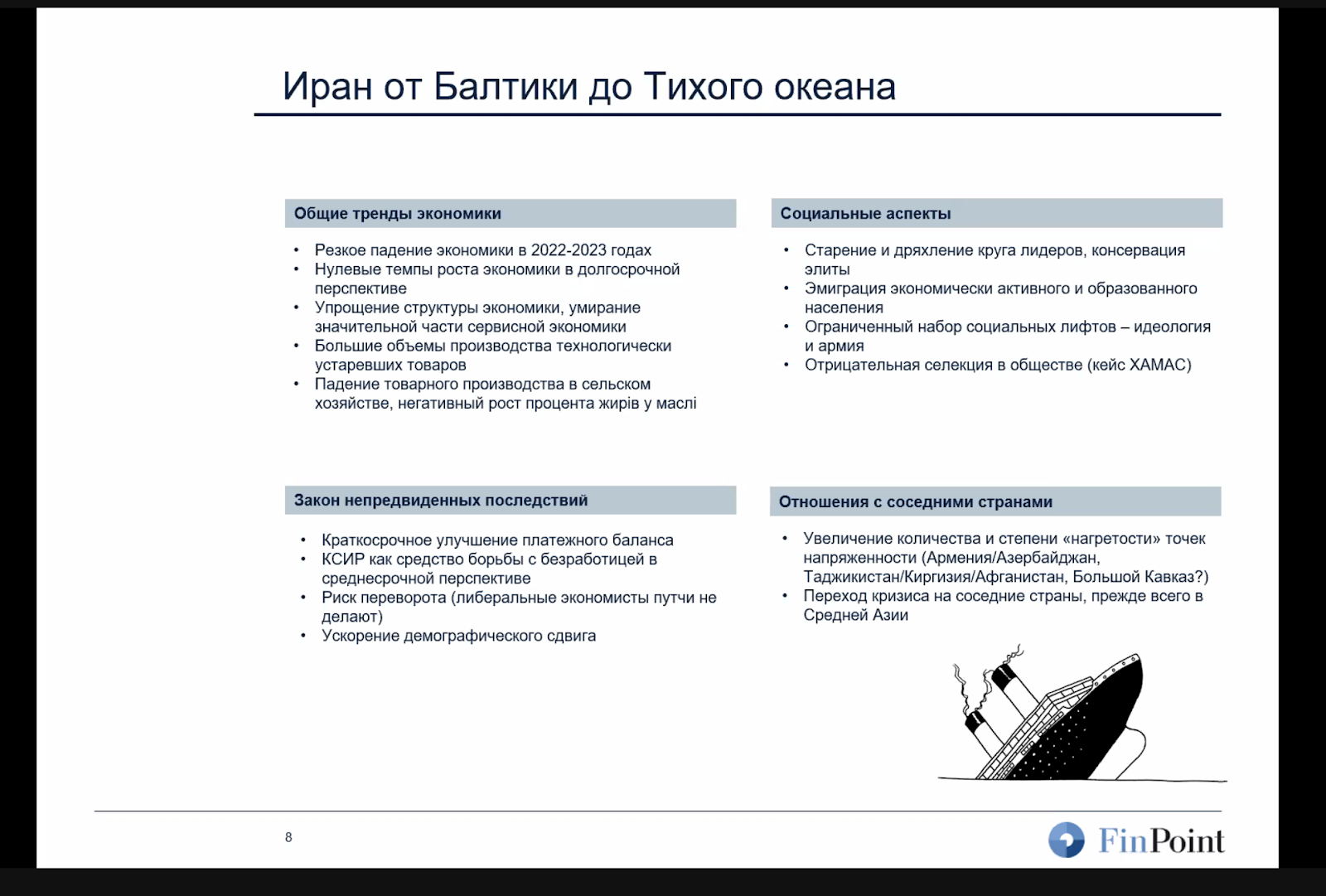 The financial market is almost dead

Russia's financial market is practically dead. This opinion is expressed by Ivan Uhlianytsia:

"According to the settlement market, there are two rates — the bank’s one and the commercial one that was somewhere around 250-300 rubles per dollar in early March, and this is a big difference from the official one, in Ukraine it is 9-10%."

If we talk about shares, then foreign receipts are not traded, the volumes have dropped by about 10 times. Central banksa and some state institutions bought back shares, but this did not help. Gazprom, Novatek, and Sberbank bought something, but the only shares to rise in price were those of Rosneft, he notes.

"If looking at prices, I would look at Russian bonds that are being traded at about 17% of par, and before that they were traded at more than 100% — at a premium. This already speaks of a default," the expert stresses.

All this is due to both official sanctions and indirect moral sanctions, Uhlianytsia adds:

"The entire forward-minded adequate world sympathizes with Ukraine, and, in my opinion, a significant part of the sanctions work like that — not only direct sanctions, but those that are atop of the sanctions — the carpet ones."

Uhlianytsia notes that a lot of banks were still preventively disconnected, and the entire infrastructure affiliated with banks was disconnected with them, including aircraft and tankers. As an example, he cites the arrest of a Russian tanker by Greece, because it belonged to a sanctioned bank.

There are public discussions in the media with fears that sanctions will be lifted quickly, but this will be difficult to do, Uhlianytsia believes. After all, it is still difficult for large companies to understand what kind of sanctions are in effect. It's logistically difficult.

Chronicle of world’s economic war against Russia: Economy runs out of reserves

Dubohryz, for his part, notes that it becomes unprofitable for foreign companies to cooperate with the Russian Federation in the future as well, because other markets are more valuable to them. As an example, he cited Decathlon who left Russia after a protest in Australia, when the company realized that it was not ready to lose the Australian market.

The expert, answering the question of how Ukrainians could facilitate the withdrawal of large brands from Russia, says that all you can do in Ukraine is to tag the ambassadors and write to your acquaintances and friends abroad to protest.

"But it’s better to work and ensure our own well-being, we will help the economy more in such a way," he explains.

Regarding the control of sanctions and the fact that some companies are returning to Russia after the alleged leaving the Russian market, he adds:

"Here, the only way is to monitor: naming and shaming, so that the company understands that losing this market is much less painful. Hundreds of people are doing this kind of monitoring."

Too early to bury Russian economy

Yevhen Dubohryz, despite all the financial losses of Moscowia, warns that it is too early to "bury" the Russian economy:

"There are a lot of hat-throwing moods now prevailing — as if there is no Russia any more, sanctions will strangle it. But the elephant is not yet taken down, let alone trampled."

According to him, the way the Central Bank of the Russian Federation reacted to the sanctions suggests that it was completely unexpected for them.

Nothing new was invented as a response to the restrictions, he notes: they imposed currency restrictions and cross-border restrictions — now it is impossible to withdraw money now, confiscation of accounts, and minting money.

The discount rate in Russia is no longer a monetary instrument — it was raised to 20% and forced people to carry money to banks. They also imposed restrictions on cash withdrawals, but the ones that do not affect the majority of Russians. There was a closure of all markets, so that the Russians do not see the shock in Western markets.

"Already according to the classics — forced negotiations, when the central bank summons the banker and tells them how to trade. If not, then blame yourself," the expert explains.

As a result of such steps, the panic in the Russian financial market subsided. 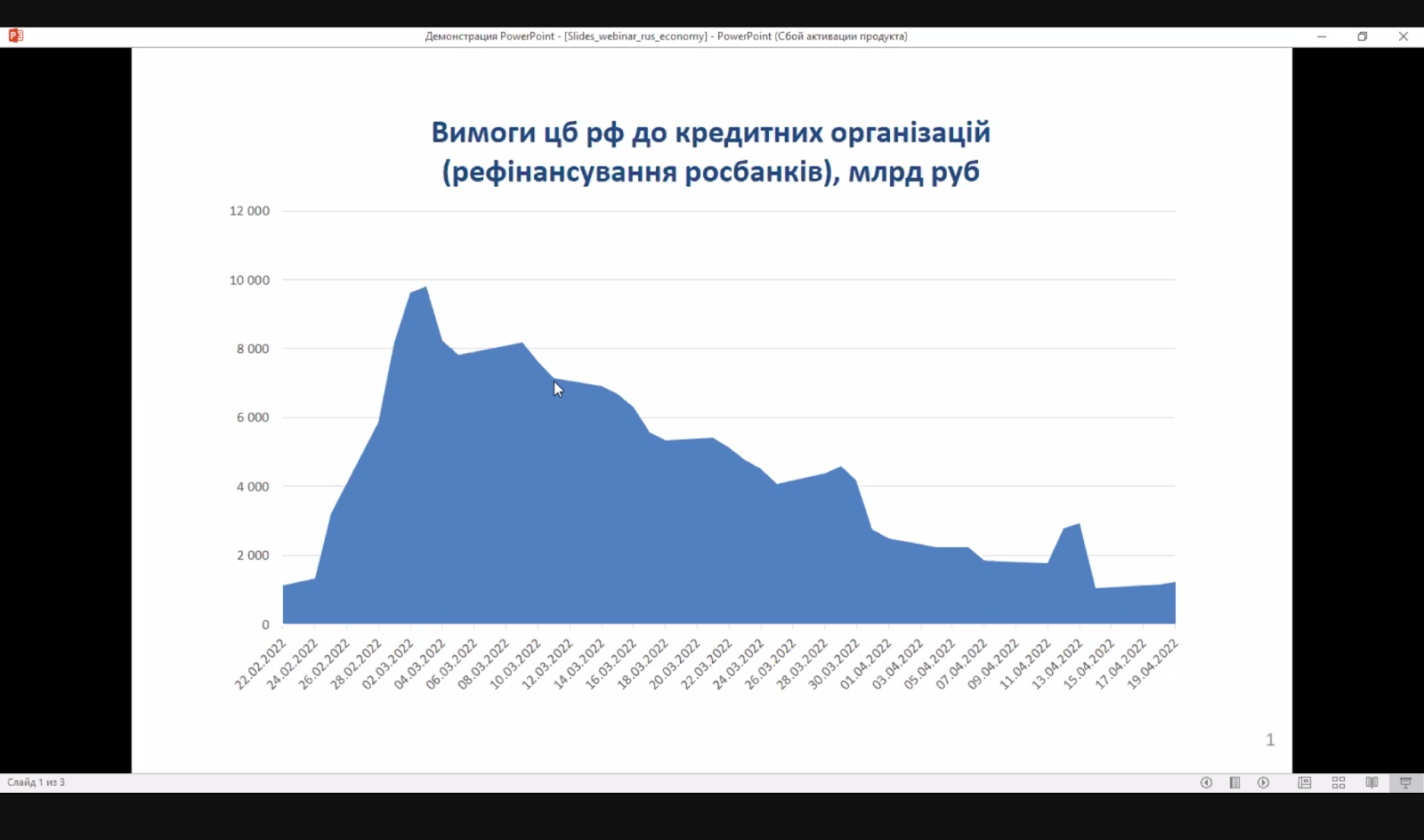 At the same time, Dubohryz stresses that one should not underestimate the enemy.

On average, wars in the modern world last up to a year, and here time works for Ukraine. 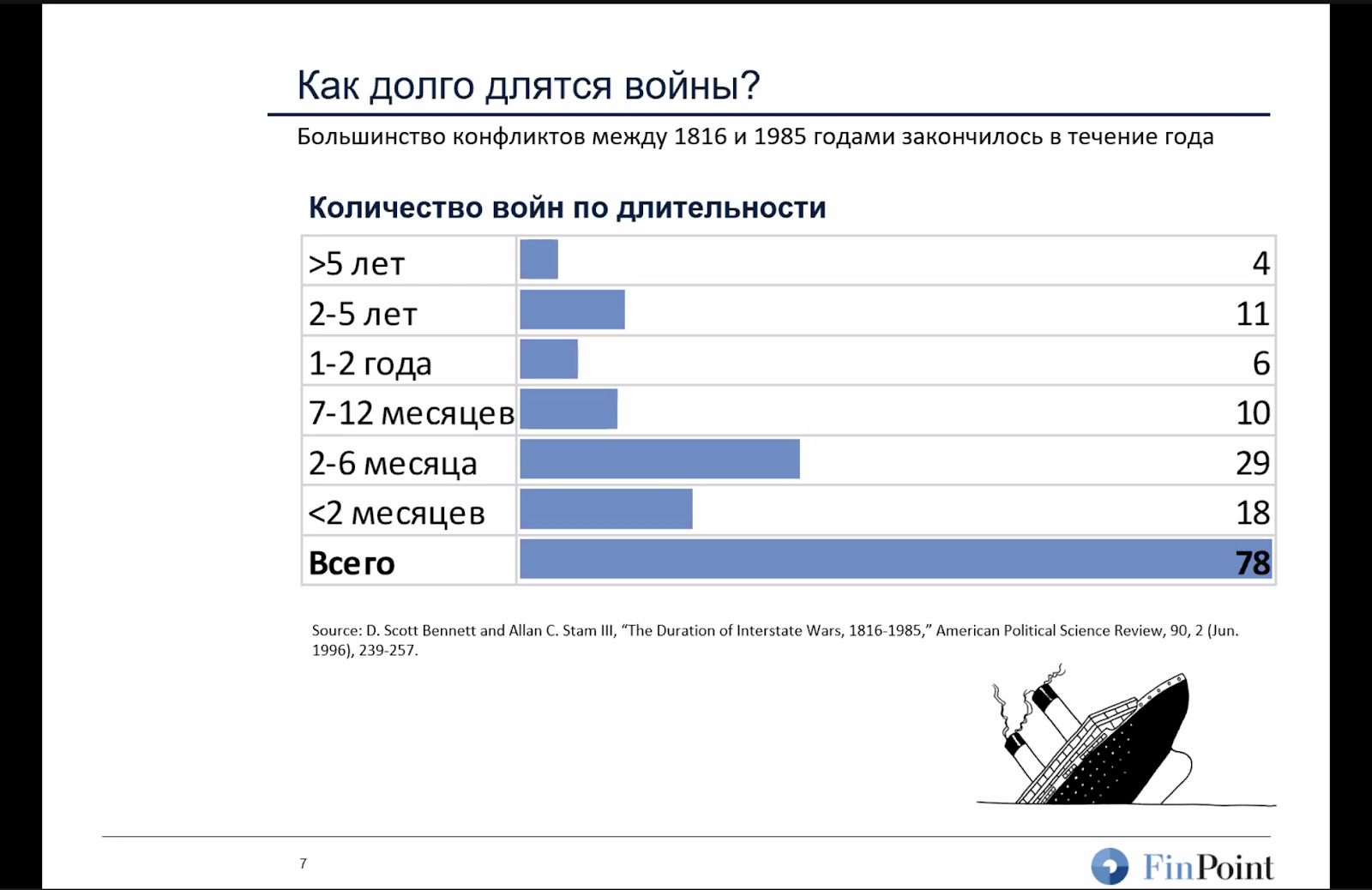 According to Serhiy Budkin, the longer Ukraine holds out and defends itself, the more economic sanctions will have an impact..

Chronicle of world’s economic war against Russia: $9.8 billion leaked from foreign currency accounts during a month

The possibility of a turning point in the economic war will come from July 2022, when sanctions will hit especially hard.

Now a 15% drop is a lot for the Russian Federation, he stresses. The fact that Ukraine has a larger drop is not an indicator, because we hope for external support, and Moscow will not have it.

Bargaining to buy some face: how Putin used Musk in the information war

Battle casualties of Russian invaders as of April 21, 2022 — General Staff of AFU

How European universities are ready to help Ukrainian students and scientists

Gas injection into underground storage facilities of Ukraine has already begun, but so far without imports

Evacuation from Mariupol and nuclear fuel of Ukraine's own production: Highlights on war in Ukraine as of April 20

Join us on social networks!