Corvettes for Ukraine. Why is their assembly not devoid of a flavor of "treason"

On October 21, 2020, the Ukrainian shipyard "Ocean" signed a memorandum with the State Defense Concern of the Republic of Turkey for the localization of Turkish "Ada" class corvettes.

At a recent session of the Marine Cluster of the UOP of Ukraine (Ukroboronprom), the Head of marketing of the shipyard "Ocean" said that an agreement would be signed by April 2021 and work would begin. The producer of gas turbine engines and diesel engines "Ivchenko-Progress" will be involved in this work from our side.

What kind of ships are these, what is their task and why is this a breakthrough for Ukraine? And a fly in the ointment.

The "Ada" class corvette is a Turkish 2.4-ton vessel designed by MILGEM (Milli Gemi—National Ship). Despite the fact that Ankara spends an impressive $21 billion on defense, plus the development of the military-industrial complex—another 2-3 billion a year (support for industry and concessional lending), it is impossible to create narrow specialized ships even for such a budget. This is how the project of the littoral ship of the coastal zone appeared. A ship that can simultaneously be engaged in patrolling, anti-submarine and anti-mine warfare, hit targets inland of the coast, conduct reconnaissance and fight enemy troops. Like all multipurpose vessels, it is not very good at each of these tasks—it is unlikely to compare with an GMW ship (guided missile weapons—ed.), a carrier of "Tomahawks" or an air defense destroyer in their niche.

End of the UOP’s era. Will Kyiv reform Ukroboronprom at the third attempt?

But even a country that operates NATO's second submarine fleet and is the leader in the number of pendants in the Black Sea region cannot afford to bake specialized warships like breakfast rolls. What would we expect from Ukraine? This is how the project "Ada" was born—"island" from Turkish.

Corvette is capable of:

In 2018, the State Defense Concern of Turkey won a tender for the supply of "Ada" ships to Pakistan. This became the largest single deal in the history of Ankara's arms exports—over a billion dollars.

Made using stealth technology, the 99-meter ship with a speed of 29 knots and an autonomy of 15 days will become the most modern ship near Karachi in 54 months from the signing of the contract. For it is crammed with innovative electronics—a sonar made of reinforced polymer material, a network-centric warfare system GENESIS, electronic maps with satellite navigation.

It’s not just an access to the production of ships made of composite materials that hold debris well and give low signatures on the radar. But really the next technological step—not without reason Pakistan, Indonesia and even the Canadian Navy are considering the "Ada" class as a platform.

In the Black Sea, where the Russian Federation has deployed a group of 8 diesel submarines of cruise missiles "Caliber" carriers, Ukraine is extremely interested in the possibility of combating submarines.

For this, the S-70B helicopter is used—a powerful 10-ton class machine that is capable of first finding a submarine using sonar buoys, and then hitting with homing torpedoes and depth charges.

And here lies a fly in the ointment and the devil that is in the details. The corvettes deal itself is an unbelievable breakthrough for Ukraine. Especially if taking into account that the hull, gas turbine engine and two diesels will be produced domestically. Jobs, technology exports and a long-awaited batch, that's it. But instead of purchasing "Sea Hawks", as the fleets of Greece, Turkey, India, and the Republic of China did, we turned on the "golden saw" regime.

Having decided that it is expensive—buy 4 machines at an average price of $36 million apiece, plus buoys, torpedoes, spare parts, and pilot training. And we need to develop our own, given by God. And the Ministry of Defense ordered from Motor Sich the development of the Mi-2 in the ship version. So that everything is as it should be—the vanes are folded and the board is placed in a narrow hangar. In the next 10 years, including for these purposes, about $140 million of government money will be spent.

To find out what the Poles found out when they designed their W-3U-1 Alligator that never went into production. That the machines of the 5-ton class can poorly perform anti-submarine missions. They cannot take three torpedoes or three anti-ship missiles on an external sling—they do not allow the carrying capacity of 1,100 kg versus 1,860 kg of the "Sea Hawk".

They have a smaller combat radius, especially when loaded to the eyeballs—550 versus 854 km. And in order to control technically complex weapons and control buoys—in addition to pilots, two operators are needed, but there will be no space for them.

Therefore, light helicopters—a palliative for small ships in the near radius—are not at all history for future Ukrainian corvettes of the "Ada" class. And it is even necessary to make tricks with combat groups, when one machine "sits" on the sonar and buoys, and the "killer" works with lethal weapons. 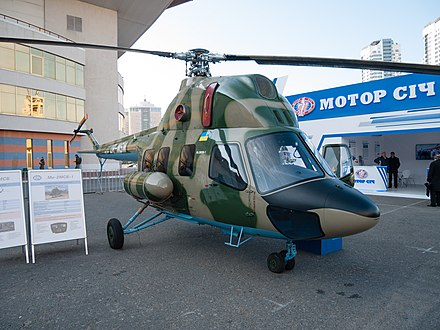 Why would the Minister of Defence Taran and his deputy Myroniuk order R&D from Motor Sich for something that has long been clear—is not entirely understandable. Unless the task initially is how to utilize the funds, and then spread their hands. And if the transfer of the Mi-2 MSB to Naval Aviation for training in order to save on flight hours is a great idea, then attempts to mold the Mi-2 into something that it is not is absolute rubbish.

Turkey and Romania are not developing naval helicopters from scratch, but are using "Hawks" and "Super Cougars". And they, for a second, have a bigger budget per person than we have. But they probably understand that a narrow batch will never recoup development costs. And that it is better to buy these several specialized aircrafts on the foreign market, as the Ministry of Internal Affairs did in the case of heavy machines for NGU (National Guard of Ukraine).

In general, the cutting of the first metal at the shipyard "Okean" for the Ukrainian corvette should be carried out as quickly as possible. Because there is at least 24 long months of production ahead. Enthusiasts of the "golden saw" in the Ministry of Defense should be shortened their hands and buy what the navies of Brazil, Thailand, and Turkey use.

For spending a billion dollars on a new-generation ship and connecting the Mi-2 there is a strange activity, if not worse. Especially in a country that is critically dependent on grain exports and fertilizer imports through ports that could be blocked by Russian submarines. We hope that intellect will prevail. And hoping that the Ukrainian fleet will finally exist.

Cheating, corruption, air raids during the NMT, and other risks of admissions campaign 2022 — in interview with education ombudsman

Ban on pro-Russian parties and McDonald's leaving Russian market: Highlights on war in Ukraine as of May 14-16

Ukrainian agricultural products will get to EU faster: Poland to simplify checks

Day of Heavenly Hundred Heroes: What activities are planned

Fear of "humiliating" Russia: How Italian host got stuck in Putin's head

Collecting signatures to ban TikTok have begun in Ukraine

100,000 Ukrainians in Clubhouse: what do they do there and how do they earn money

Naftogaz strengthens its position in the liquefied gas market. What is known about the future plant

Negative rating of airlines and high-profile scandals with tourists. Who is often late and ruins the vacation

Not the increase in prices, but a "slight indexation". How the Ukrzaliznytsia ticket prices will rise

"The IMF screwed up": Will Milovanov's comment affect the negotiations with the Fund

Adaptive quarantine until May: what restrictions have the Cabinet of Ministers adopted since February 24

Who has poached the viewers of Viktor Medvedchuk's closed channels. The figures and what is behind them