Medvedchuk revealed the details of the coal and pipeline cases. Photo: SSU

Medvedchuk being interrogated by the SSU. Medvedchuk revealed details on the coal and pipeline cases, and also detailed Poroshenko's participation in them. Everything we know about Medvedchuk's testimony to the SSU as of May 23, 2022.

Medvedchuk and Marchenko’s ties and firms: Putin-crony in Yalta, Shufrych, and Russian oil

Putin's crony Viktor Medvedchuk, suspected of treason, revealed the details of the scheme for withdrawing from state ownership a segment of the Samara-Western Direction oil product pipeline, further pumping diesel fuel by it, and also specified the role of Petro Poroshenko in it.

According to the Security Service of Ukraine, Medvedchuk noted that the fifth president had not only asked him to establish contact with Russian authorities, but had also contributed to the adoption of relevant decisions by Ukrainian authorities.

"In order for this pipeline to become private property, and in fact the property of Poroshenko himself, it was necessary to take a number of steps... The courts, the prosecutor’s office, the Antimonopoly Committee, the State Property Fund — they all made decisions, of course, necessary for the personal interests of President Poroshenko," Medvedchuk said.

Putin's crony also said that he had been engaged in pipeline schemes exclusively at Poroshenko’s request. Moreover, during the year of operation, this section of the main oil product pipeline earned about $84 million for the ex-head of state, which is twice the amount that it cost to buy ($42 million). Medvedchuk also added that the work of the pipeline stopped right after the end of Poroshenko's presidency — in May 2019.

In addition, Medvedchuk testified about establishing schemes in 2014-2015 for purchasing coal for the needs of the Ukrainian energy sector from ORDLO.

"The whole leadership of the state apparatus was actually involved in it, starting with the president and ending with ministers, law enforcement officers, and those who directly implemented this scheme," he said. 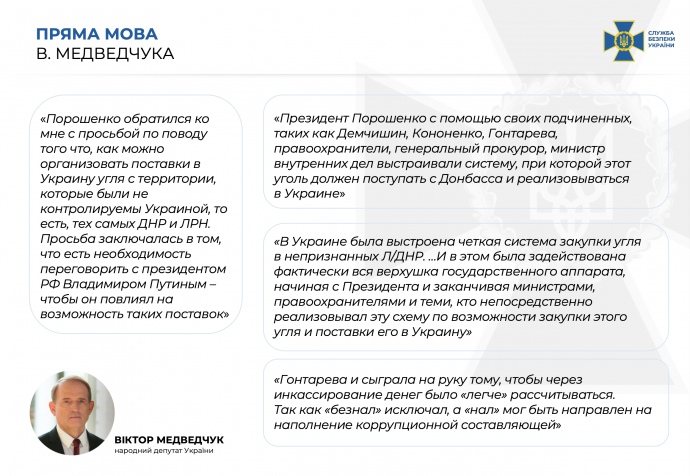 According to the SSU, Medvedchuk mentioned a number of names involved in this mechanism, including ex-Governor of the NBU Valeriia Hontareva, ex-Minister of Energy Volodymyr Demchyshyn, former MP Ihor Kononenko, etc.

"It was (Kononenko) who proposed the candidacy of (businessman Serhiy —

) Kuziara to organize both the purchase and transportation, as well as supply of coal to Ukraine. Minister Demchyshyn, who replaced the disobedient and uncontrolled Prodan, did everything to make this scheme work like clockwork, it was they who appointed representatives of uncontrolled territories to the positions of managers of Luhansk coal and the mine named after K.I. Kyseliov, and registered these mines," Medvedchuk said during interrogation.

"There is no doubt that the customers wrote the words about Poroshenko for Medvedchuk, which is why he read them from the prompter. The "payment" for these "testimonies" was a transfer to better conditions of stay and promises of a swap."

In addition, the party’s statement hints at some persons in the Servant of the People and in deputy groups close to this party, who can be suspected of collaborationism. However, the ES notes that the SBU does not deal with them.

"In our opinion, in general, what the SSU does is purely grandstanding. Firstly, this is not their case, this should be done by the SBI. And what the SSU says about this confirms that there is nothing to do with the truth and the law," he told Suspilne.

Context. On February 27, on the fourth day after Russia's invasion of Ukraine, it became known that Viktor Medvedchuk escaped from house arrest he had been under in several proceedings. The list of charges brought against Medvedchuk included treason. The search for the fugitive deputy was carried out by the Security Service together with the prosecutors. On April 12, the SSU caught him wearing the uniform of the Armed Forces of Ukraine.

The killing of the al-Qaeda chief: how it was done

Zaporizhzhia NPP as a shield against the Ukrainian army and uproar around Amnesty: a digest of Western media

Mondi Group, despite its announced exit from Russia, still hires and promises to replace Tetra Pak

Medvedchuk and Marchenko’s ties and firms: Putin-crony in Yalta, Shufrych, and Russian oil

World of missiles and bombs. Ze in Davos reflects on future without Ukraine’s victory

Hell in Avdiivka, it is being wiped off the face of the earth: City survived one of the worst shellings in 8 years

Warsaw terminates gas contract with Russia ahead of schedule

Russian troops shelled Korosten twice a night in Zhytomyr region: What is known

Battle casualties of Russian invaders as of May 23, 2022 — General Staff of AFU

Duda: Poland to do everything for Ukraine to become EU member

Battle casualties of Russian invaders as of May 22, 2022 — General Staff of AFU