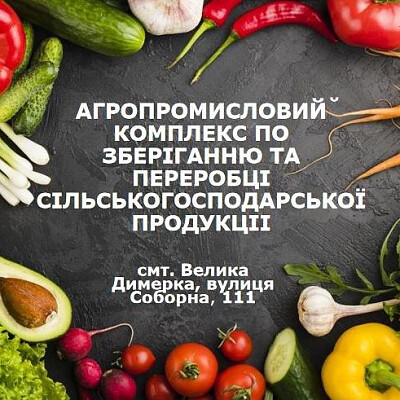 In Velyka Dymerka (Brovary district, Kyiv region), there is a vegetable storehouse (16,590 sq.m.), a weigh-house, an autonomous electric power substation, an open reservoir, pumping station premises, a filtration field, and a checkpoint with a store (83.1 sq.m).

The company has a fairly convenient location as there are located main transport corridors of the country nearby:

Triumph built the agricultural complex with the infrastructure for funds partly raised from the bond placement.

Repeated attempts to avoid debt repayment and withdraw collateral ended up with the enterprise was abandoned: the management did not pay employees their salaries, and the counter-parties were not payed either.

The agricultural complex employs dozens of people, for whom it is actually the only source of income.

In order, among other things, to save jobs, Money Flow decided to register the ownership of a non-core business to pay off the existing debts of Triumph.

At the moment, investor Vasyl Veselyy got interested in the company. It is also planned to attract foreign investment and introduce new effective management experience.

Vasyl Veselyy was born in Drohobych, Lviv region. A well-known businessman, he often initiates volunteer projects providing support to the Ukrainian army and Donbas civilians. Apart from that, he is implementing corporate social responsibility.