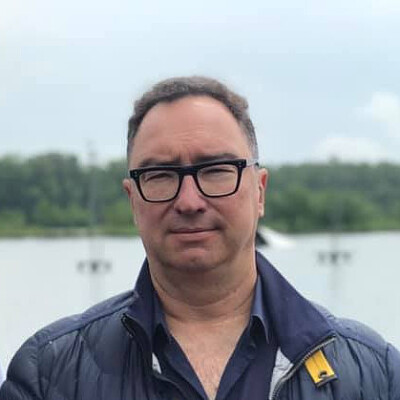 Businessman, co-owner of the financial and industrial group "Privat"

Businessman, co-owner of the financial and industrial group "Privat"

In 1989, after graduating from the institute, he got a job in the cooperative Fianit, where he worked on the creation of automatic control systems for 1.5 years. There, he met Kolomoisky and Boholyubov.

Kolomoisky and Boholyubov bought equipment in Moscow. And Martynov sold it in Dnipropetrovsk.

'First you sell gasoline, then you start storing it at your oil depots, then you realize that you need to sell it through your own gas stations. Then you begin to understand that you also need to produce it by yourself. So you finally think that it would be nice to extract oil as well,' Martynov told the Correspondent.

'I am more involved in corporate life, the oil sector, partly metallurgy,' Kolomoisky explained to Dzerkalo Tyzhnia the roles of each partner in 2005.

In an interview, Kolomoisky said that Martynov was an apolitical person, and he called his participation in a political project an accident.

'Martynov is fond of helicopter and air sports, and he has various friends on this field. And one of them, I think, turned out to be the leader of that party, so he got Martynov to that project, put him in the top five. Maybe during some kind of party they invited Palitsa to their "warm company" as well,' Kolomoisky explained to Ukrayinska Pravda.

Martynov is the owner of Sentosa Water Ski Club LLC. Sentosa Cable Park is a sports and entertainment complex on the Dnipro river shore.

Now, Ksenia lives in Kyiv, often uploads photos from a mansion in Koncha-Zaspa.

She is a member of the Equestrian Federation of Ukraine.

For more than three years in 2016-2019, Martynova worked at Equides Club that belongs to the family of the ATB co-owner Hennadiy Butkevich.

In March 2020, she was looking for a job through free online platforms. She indicated that she was ready work as development manager, as she knows how to carry out inventory, tenders and negotiations, conclude agreements with partners.

Ksenia graduated as philologist and diplomat. She is fluent in English and German.

Ex-wife: Tetiana Martynova (maiden name: Naumenko). In social media, she indicates that she is from Chernivtsi, and now lives in Vienna.

This is Olexiy's second marriage. The couple got married in 2009. They have three children. The eldest is Leonid, and the twins are Maria and Olexandra.

In February 2020, the Zhovtnevy Court of Dnipro divorced Olexiy and Tetiana. Martynov became the initiator. He told the court that since the summer of 2019, his wife had been abroad almost all the time, did not raise up their children, and behaved aggressively. She was threatening to take the kids away and take them out of the country.

Now, Martynov wants to determine the residence of his children through the court. Therefore, he asked the State Border Service for information about crossing the border of his former wife. This can confirm that Tetiana rarely visits Ukraine.

Nephew: Danila Karpenko, born June 6, 1994. He is the deputy director of the Dnipropetrovsk regional branch of SETAM, a state enterprise that sells seized property at auctions.

Danila's father Dmytro Karpenko has been at the Mirotvorets database since 2016. He got there for financing terrorism, anti-Ukrainian propaganda and agitation.

'Co-owner / administrator of anti-Ukrainian resources alternate-politics.info, alternathistory.com. The pseudonyms in social media are boroda and pavel-bor,' the Peacemaker website indicates.

Brother-in-law: Alexey Ostanin, born on July 17, 1957. He is married to Elena, the sister of Elvira Martynova (Olexiy's first wife).

Alexey Ostanin is a co-owner of Metallurgical Transport Company LLC. The company is one of the largest rail freight forwarders in Ukraine. Among the founders are Archon, Vityaz, Graidstock and Geolant. They are registered to offshore companies in the Marshall, Bahamas, British Virgin Islands, Belize and Cyprus.

The business center is located on Povarskaya (New Arbat Avenue) street. According to the Russian authorities, the premises were owned by Kolomoisky, Boholyubov, Martynov and Moscow citizen Dmitry Ryabokon.

The lawyers of the Russian businessman assured that the business center was 100% owned by him. In 2002, he took out a loan in MoskomPrivat (Privatbank subsidiary) to buy the building.

According to the media, on October 11, 2009 in Dnipropetrovsk (now: Dnipro), the oligarch's daughter Xeniya Martynova was driving an orange Infinity and hit 62-year-old Lyubov Temnaya at a pedestrian crossing. The car, according to an eyewitness, took off leaving the pensioner on the road to die. Lyubov was going home from the night shift that morning, as she worked as a watchwoman at the university. Xeniya was studying at the same university at that moment.

A month later, the regional police confirmed that Xeniya Martynova was driving that car. They promised they would take the case to the court. A year later, the police refused to comment on how the investigation was being conducted. In the register of court decisions, there is no information about the fatal accident either.

'I am a provincial person. I don't want to move to Kyiv or even live in Vienna, New York, Miami.'