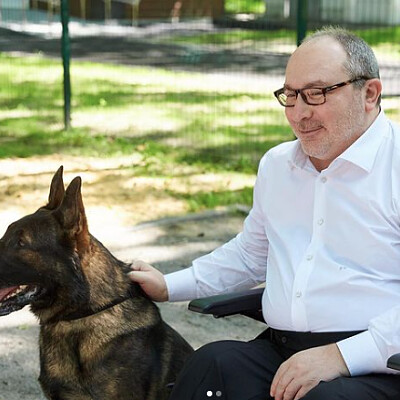 In September 2020, he became infected with coronavirus, the latter became more severe and Kernes got pneumonia. Two days later, Kernes was taken by plane to the Charité clinic in Berlin.

On December 11, it was announced that the mayor of Kharkiv had kidney failure.

Kernes died on the night of December 17, 2020. The cause of death is consequences of coronavirus (COVID-19) infection. The politician will be buried in his hometown. Earlier, the media reported several times about Kernes' death, but that information was later denied. This time, businessman Pavlo Fuks announced the death of his friend, and later the information was confirmed by the politician's relatives and colleagues.

According to Ukraine Criminal, he was "playing for a fool": nearby to auto shop Start, he and other guys were playing fast and loose, sold non-existent cars, and used "broken" checks.

In Soviet times, checks were analogous to currency; you could pay with checks in Beryozka, a store with imported consumer goods. On the black market, the ruble to check rate was 2:1, and people who wanted to exchange money were often deceived: they got half of the total amount instead.

However, the victims did not turn to the militia, as currency transactions were illegal.

Kernes was charged with robbery and fraud. The defendant repented and helped the investigation, he spent part of the term in custody, so eventually, the court released Kernes from custody.

Back then, the future politician bought up the shares of NPK-Bank and built his own multi-profile NPK-Holding. It includes the newspaper "Vecherniy Kharkov", the TV channels "Tonis" and "Seventh Channel".

Two years later, he became a participant in the Orange Revolution in Kharkiv. Together with Arsen Avakov, he criticized Yevhen Kushnaryov.

According to the declaration for 2019, Kernes rented a room (7 sq.m) since 2002 from someone Volodymyr Yarmak.

Since 2012, he had lived in a room (57 sq.m) in National hotel. The hotel belongs to NPK-Holding OJSC and Trading House Pushkinsky LLC. The beneficiary is Kernes' common-law wife Oksana Gaisinska. Since May 2020, the hotel's director Karen Gevorkyan is another co-owner of the three-star hotel.

In the case of the abduction and beating of Euromaidan supporters that involved Kernes as a suspected person, Gevorkyan was a witness. The director of the hotel, of course, did not see anything and allegedly learned about the accusations against his guest from the Internet.

Among the declared valuables, the mayor had 11 expensive watches and a wheelchair worth UAH 101,000.

Apart from that, he declared the shares of Kharkovoblenergo, Kharkovenergosbyt, and the asset management company Finex-Capital.

Over the past year, the official earned UAH 20.06 million including salaries, dividends, and interest. He also had UAH 17.35 million and $17,500 on bank accounts and another UAH 64 million in cash.

In March 2020, he purchased an anesthetic and respiratory apparatus for UAH 2.6 million.

In June 2020, he contributed UAH 1.8 million in favor of a political party.

In September 2020, he filed a declaration where he indicated the plane transportation cost to Germany — UAH 1.7 million, while the medical services cost him UAH 4.1 million.

According to Fuks, he was friends with Kernes for about 30 years.

'At night my friend passed away, the person with whom I have been friends for 30 years, we are not just familiar. Everyone is shocked, of course. But this is life ... what can you do. And everything is so strange. He was in very good condition, the doctors already wanted to let him go home, but he got complications in the kidneys, and when the kidneys gave up working, the situation changed,' Pavlo Fuks said on the air of one of the TV channels.

In 2005-2006, Kernes led the election campaign of Dobkin for the post of mayor of Kharkiv. He was the secretary of the City Council.

The head of the faction of the party "Block Kernes—Successful Kharkiv". After the death of his boss, he is the acting head of the city.

According to the declaration, he works as deputy director for organizational issues in a BTI office (Ukr. Bureau of Technical Inventory - Ed.). Over the past year, he received UAH 87,000 as a salary. And he has UAH 3.7 million in bank accounts.

With his wife Julia, the couple is raising two children, a son Luka and a daughter Kira.

In 2019, he ran with his father on the list of the Opposition Bloc party and was listed on the CEC website under No. 17.

In April 2020, Danylo became the owner of Alphaville, a firm that works with renting real estate.

On September 21, he became the owner of Zeon venture fund with UAH 6.5 million as authorized capital. The foundation is registered in Kyiv.

It is known that until 2013 she was listed as a private entrepreneur in Moscow. There, she sold clothes and footwear.

She is the daughter of the former Deputy Prosecutor General Yuriш Gaisinsky. In 2015, Kernes transferred his main business, NPK-Holding, to Oksana.

Oksana is also a co-owner of the firms Rivlad LTD and Fiaba (leasing real estate), LLC Comilfo Trade Center that is located on Sumska street in Kharkiv downtown.

According to the Ministry of Justice, Rodion is registered as the owner or co-owner of 28 firms.

According to the local media, in May 2020 literally in one day, Gaisinsky became the owner or co-owner of most of the main city markets. We are talking about the Central and Konnyi markets, trading floors near the metro station Heroiv Pratsi, Kholodna Hora, Tractor Plant, and others.

'I consider such a decision absolutely unjustified for a city with zero recorded cases of the disease. People need somehow commute to work and move around.'

He allegedly took revenge for an attack on himself back in 2006: at that time, unknown assailants attacked Medvedev at the base floor of his house, cut off his nose, ears and cut his buttocks.

Medvedev was imprisoned for 10 years. A year later, the Higher Special Court overturned the sentence and released the man.

After the operation and rehabilitation in Israel, the mayor started to move around in a wheelchair.

'I told them [the investigators] whom I suspect. I named Avakov and Baluta. I believe in that Facebook mailbox that was cracked and where their correspondence was. Today, I can state as a fact that the investigation is an imitation, not an investigation,' he told Radio Liberty in 2014.

For almost 6.5 years, the investigation established that the killer was hiding behind pillar No. 71 on the Belgorod highway.

The police also checked the version of whether there the ATO fighter Vadim Pinus from Kharkiv was involved in the crime: the Azov volunteer with the code name Morgan was killed in Kyiv during a shootout with law enforcement officers. Since the case went cold, this version allegedly was not confirmed.

Almost immediately after the assassination attempt, unknown persons began to surveille him and his family, he received threatening text messages, and a cartridge 7.62 was planted on his son's home. A bullet of this caliber was used by a killer who fired at Kernes.

For almost five years, the mayor of Kharkiv and two of his guards were tried in Poltava. In August 2019, the case was closed as the prosecutors allegedly dropped the charges.

The last court hearing was in October 2020, but it was postponed due to the illness of the accused.

'We are Islamic State fighters and we've mined the Kharkiv Palace, so an act of retaliation against the Jews and their leader Kernes will take place.'

The special services evacuated people from the Premier Palace Hotel Kharkiv, searched the premises, but found nothing suspicious. Criminal proceedings were opened under the article "false mining". The "joker" was never found.

Now the case is being conducted by the State Bureau of Investigation investigators.

'You've got a boring face—no one will give you money.'

Such a tip Kernes gave to Dobkin during the filming of a 2005 election video.

'Kandaurov—Bitch dog, I will multiply you by zero!'

In 2012, he said that about the ineffective work of Anatoly Kandaurov, the director of Gorlift.

'I will break both of your arms and legs so that you will never do this again.'

About the demolition of the Lenin monument in 2013.

'Dear Deputy Governor, your name is Pastukh. All the people who came here came at the invitation of Yaroslavsky and Kernes, and he (Kucher) sent Pastukh.'

This is how in March 2020 Kernes reacted to the fact that the head of the Kharkiv Regional State Administration Kucher did not come in person to the meeting of the anti-crisis headquarters and sent his deputy instead.