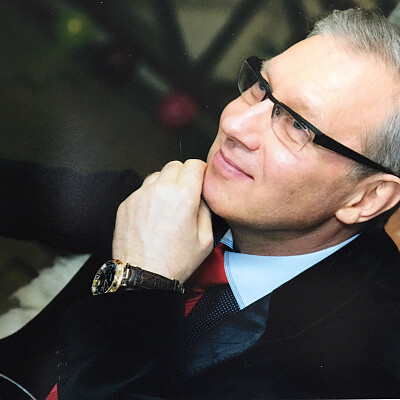 Hennadiy Butkevych is a former policeman, worked at Department Against Misappropriation of Socialist Property (shortly The OBKhSS). In 1991, he headed the department for the fight against organized crime in Dnipropetrovsk.

Hennadiy Butkevych started his business with a small cafe. In 1993, he became a co-owner of the trading company AgroTechBusiness, where he got after leaving the company of Yaroslav Korchevsky, an ex-banker and city head of Dneprodzerzhinsk (now: Kamianske).

In 1995-1997, he headed the security service at Unified Energy Systems of Ukraine(founded by Yulia Tymoshenko). With the money that he earned while working for Tymoshenko, he built a meat factory.

In 1998, Butkevych and his partners registered ATB-Market (an abbreviation for AgroTechBusiness).

Hennadiy Butkevych insists that business should be separated from politics. Therefore, he does not participate in politics directly. However, in the Rada of the 5th, 6th and 7th convocations (2006-2012) he was listed as an assistant to the people's deputy from the Party of Regions Yuri Samoilenko.

Samoilenko is a former deputy head of the Security Service of Ukraine. According to the media, he is a longtime friend of Butkevych. He admitted to journalists that in May 2014 he helped presidential candidate Petro Poroshenko.

November 1, 2018, Hennadiy Butkevych was sanctioned during the Russo-Ukrainian War together with other 322 citizens of Ukraine.

In July 2019, Anna Lichman from the party Servant of the People won in the early parliamentary elections in the majority constituency No. 30. Lichman is the head of the corporate communications department of ATB Corporation and the director of the ATB All-Ukrainian Charitable Fund.

In the list of the richest residents of the Dnipro, Hennadiy Butkevych is on the first place.

In the mid-1990s, he headed the security service of the United Energy Systems of Ukraine. He says that they still keep in touch with the leader of the "Batkivshchyna", but rarely.

an oligarch, son-in-law of Leonid Kuchma.

In the 1990s, Pinchuk worked with Yulia Tymoshenko. Butkevich says he 'provided Pinchuk with security services.'

The businessman says that as he wanted to stop сrime violations against himself and his family, he met with Lutsenko in person.

a former member of the Russian State Duma, who moved to Ukraine and has already received Ukrainian citizenship.

Together with Butkevych, he is a co-founder of Trident Acquisitions, an American company that intends to invest in Ukrainian energy.

Also, among the co-founders of the company, there are Timur Alazania, a close relative of Mikheil Saakashvili, and Viktor Topolov, the 6th Minister of Coal Industry.

This is the first company that managed to obtain a license for private exploration of uranium and rare earth metals deposits.

According to the media, Butkevych allegedly is associated with Arsen Avakov due to the "uranium business." However, the businessman assures that he does not have a common business with any current civil servants.

'Because it is a matter of principle.'

Butkevych is the owner of Union of hunters 'Fauna' that is located in the Ivankiv district, Kyiv region.

Daughter: Daria Butkevych (born October 9, 2000) is a student. In social networks, she indicated that she works at the Kyiv equides club Equides.

Former son-in-law: Serhii Rybalka, businessman, founder of Snack-Export (S.Group corporation, trademarks Kozatska Slava, Semki, and Macho) and ex-MP from the Radical Party of Oleh Lyashko. In 2006, he married Anna Butkevych. In March 2013, they divorced. They have a common daughter Roksolana.

One of the most notorious scandals associated with Hennadiy Butkevych is the conflict with former son-in-law Serhii Rybalka. According to Butkevych, Serhii left the family for another woman. After that, Rybalka complained to reporters that he was not allowed to see his daughter and raise her up. Family disputes resulted in a business conflict that began in 2013 and continues up to this day..

Companies associated with Rybalka and Butkevych are suing each other. S.Group Corporation was suspected of evading payment of UAH 145 million of taxes, as well as of attempting to fraudulently seize the funds (UAH 110 million) of ATB-Market.

In return, ATB was accused of sponsoring terrorism. In 2015, the people's deputy registered a bill on the nationalization of ATB allegedly because of trade in the occupied territories.

In 2016, Rybalka had a weird accident with unknown people in Kyiv — someone threw scale weights onto his car. The people's deputy wrote in social networks that he connects the "assassination attempt" with his former father-in-law.

Hennadiy Butkevych appealed to the court. As the result, Rybalka and the media that published this news were ordered to refute information about the involvement of the former father-in-law in the attack.

Earlier, Butkevych won a trial against the magazine «Публичные люди» (Eng. Public People) that published an interview with Rybalka. In that article, Rybalka accused his ex-father-in-law of 'actively bribing security officials, and they began to plant drugs and weapons on us.'

In May 2019, the Supreme Court ordered the MP Vitalii Kuprii to refute the charges against Butkevych. The people's deputy wrote in social networks that the head of the SBU in Sumy region flies on a businessman’s helicopter. Such a flight costs $ 5,000.

Kuprii also accused the businessman of doing business in the occupied territories and paying millions of taxes to the aggressor country.

In two criminal proceedings, Hennadiy Butkevych appears as a victim. In March 2014, masked barglars attacked the hunting club Fauna in Bilyi Bereg village, Ivankovsky ristrict, Kyiv region. They tied up the guard, stole equipment and highly expensive weapon. Some guns were encrusted with gold. Later, weapon was planted at the regional police department. Four suspects were arrested. They turned out to be Maidan activists. First, the guys were convicted, but then the court reviewed the case, and they were acquitted.

In another case (hooliganism), the accused was activist Artem R. The defenders of the guy insisted that he did not attack the businessman, but held rallies near Butkevych’s fence. The fence was damaged and now the guy can be imprisoned for long—he has to pay for the services of expensive lawyers.

Hennadiy Butkevych actively helps doctors fight coronavirus. According to media, he donated UAH 14 million. In March 2020, Butkevych purchased beds, equipment and protection for doctors from hospitals in the Zhytomyr region.

'I’m not an oligarch, I haven’t privatized state enterprises for a penny or for debts. I and my partners have done our business from scratch.'

'On the occupied territory, we lost everything: Russian aggression took 152 stores and a distribution center from us. Our financial losses in the Donbass estimates to almost $ 300 million.'

About reasons why investors do not go to Ukraine:

'People here hate rich people. They HATE them. But you know, it does not surprise me, it is logical. Some "activists" are pseudo-patriots who simply extort money from investors. For example, in 2014, in our Zhytomyr region, the ATB store was demolished, even though it had the entire package of permits. Nobody has been punished so far.'