COVID-19: How Britain and the EU are fighting over the export of vaccines and what Ukraine should expect

Britain became the first country in the Old World to register a COVID-19 vaccine from pharmaceutical giant Pfizer/BioNTech back in early December 2020. Earlier than in the United States itself, and three weeks earlier than Brussels.

A vaccine against coronavirus: how the medication efficacy will affect the new strains

London was the first on the continent to receive the product of the national manufacturer—the Swedish-British company AstraZeneca. The planned shipment was up to 2 million doses per week, the contract was signed 90 days earlier than the EU did that.

Before the British breakthrough, only American Moderna and Pfizer had been approved by European regulators for vaccination campaigns. Among the top 5 European economies, only the Germans were able to repeat the achievement of the British with domestic developments—the French, Spaniards, and Italians stand in line on a common basis.

In the foreseeable future, another giant, Johnson & Johnson, will enter the market, and the UK is completing trials of Novavax. At the same time, three developments will be approved for emergency vaccination on the island—one- and two-component, requiring ultra-low temperatures for storage, and those for which an ordinary refrigerator is sufficient.

Because of a quick response compared to the Brussels bureaucracy, the purchase of the first large dose of medications from Pfizer (40 million doses) and a domestic medication developed in close cooperation with the University of Oxford, the British are vaccinated at an amazing speed.

Against Covid and not only: a list of vaccinations without which you may not be allowed to travel abroad

Almost 9 million people received the first dose of the vaccine as of the end of January 2021. This is already 15% of the UK population. France, Italy, Germany, and Spain are still in the 3 million corridor receiving the first component.

Amid London and Brussels "divorce" after Brexit, this "vaccine race" could not but lead to conflict. Pfizer's announcement that the schedule for the medication supply is shifting due to the modernization of factories added fuel to the fire. But, in principle, this is not the first conflict amid a lack of resources and COVID-19. Last spring, Italy, an EU and NATO ally, was banned from shipping paid masks and medical supplies from Germany and France. Not humanitarian supplies through the Red Cross, but an order paid in hard currency.

The burden of the pandemic

For example, in Germany, the average cost of treating a patient from COVID is over 10,000 euros. And 450 deaths in hospitals just on 30.01 is already an order of magnitude more than those who die on the roads in accidents.

In addition to humanitarian issues, the burden on insurance has increased significantly, taxes and consumption have not been received, and restrictive measures are being enhanced. As a result, GDP fell by 5% after a decade of continuous growth. And health care costs are constantly growing—up to 11% of the FRG's GDP, and if the government starts to cut them, indirect deaths will also follow.

So there is not much time for sentimentality and European values. Voter irritation is growing, the press is berating the authorities, and the economy, heavily attached to services, is in a fierce fever.

So when information surfaced in the media last Friday that AstraZeneca was planning to deliver three times as many doses to the United Kingdom as the EU, it had the effect of a bomb. 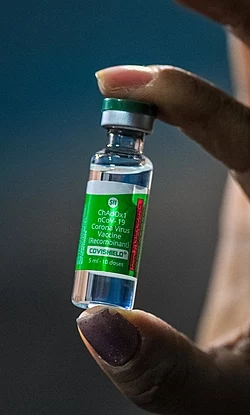 The company attributes this to a program to modernize a plant in Belgium, while UK subsidiaries in Staffordshire and Oxfordshire are already reaching planned capacities. In addition, the British authorities have imposed a ban to export vaccines until the order is completed domestically. This also caused a sharp reaction from Brussels.

Threats followed to confiscate a UK consignment of medications from Pfizer. This was followed by inspections of the Belgian Federal Agency for Medicines, factories in Seneff, and counter-bans on exports from the EU.

Emergency vaccine against coronavirus: Rada has agreed to preclinical vaccinations

The rhetoric is really harsh—CDU Euro-MP Peter Liese even allowed himself a passage: "if the only way is to increase supplies to the EU by reducing supplies to Britain, then it is quite fair".

Especially, since the situation concerns almost all neighbors. Spain's vaccination program is on the verge of collapse—its implementation in Madrid has already been postponed for 2 weeks. Ireland, an EU member, and Northern Ireland, a member of the United Kingdom, find themselves in a delicate situation when their economic ties and tourism, heavily attached to cooperation, will be under attack. For one part of the island has every chance of ending the campaign, while the other does not.

However, the "vaccine race" has not yet developed into a "war", and the parties are limited to harsh statements. But the European Commission has already adopted a provision stating that medications can be exported from the EU, if all members approve it. The situation is also complicated by the fact that the doses of AstraZeneca are bottled in separate containers, for example, in Germany, for example, no one will benefit from the conflict.

Amid the postponement of vaccination in Spain and the statements of the Minister of Health of Germany about 10 weeks of severe deficit, the Cabinet of Ministers of Ukraine presented its vaccination plan.

Despite the fact that there are still no medications (neither Chinese, nor by the COVAX mechanism) in the country, it should start in February and reach 14.5 million people by the end of the year. Or 43,000 people a day. Whether these plans are realistic due to the fact that Ukraine barely surpassed the level of 14-15,000 tests per day—the answer is still painfully obvious.

Kyiv will purchase coronavirus vaccines at its own expense: who will get them

However, after a year of fighting the pandemic, even the first world countries show a discouraging unpreparedness for the challenges of COVID-19. Most likely, the situation of the fight against poliomyelitis or cholera will be globally repeated—when in some regions of the world the disease was brought under control, and in others it took lives for many months and years.

Mistake in the text? Please select it and press Ctrl + Enter

The United States has extended "Ukrainian" sanctions against Russia

From allergy to death: what are the side effects of the COVID-19 vaccine, and which ones are the norm